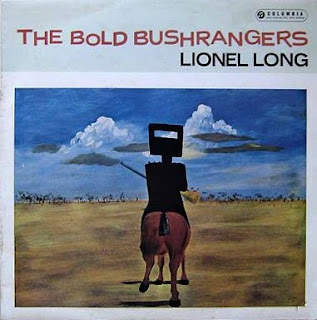 The Bold Bushrangers was a two LP set issued in 1963.  All but two of the tracks were specifically penned for this project by the Australian author Kenneth Cook (best known for "Wake in Fright").  Somewhat paradoxically, whereas Long previously recorded traditional material with modern-style musical backing, this contemporary material has a very folky backing often with just Long accompanying himself on guitar.  Some tracks also feature that superb five-string banjo player, Dave Guard, an original member of the Kingston Trio who migrated to Australia in 1962 and backed several Australia performers (sometimes under other names e.g with Tina Date as Dynamite Finkelstein).
Kenneth Cook's wife, Patricia Cook is the soloist on three of the tracks and performs a duet with Long on one other. I know nothing about this lady but she gives a strong performance with a distinct Irish style highly reminiscent of the legendary Delia Murphy, the "Queen of Connemara" who was very well-known in Australia as she had accompanied her husband Tom Kiernan when he was appointed as the first Irish Ambassador to Australia in the post WWII years and often performed especially on ABC radio.

There have been some difficulties in getting reasonable LPs of this set.  Finally, Ian of WA, has provided me with copies of both volumes (thanks Ian),  Volume 1 is mono whereas volume 2 is stereo and in far better condition than 1 which had three fairly worn tracks on side two (the first three) causing some minor distortion which I can't correct.

Ian has also kindly provided text of the rears of the LPs. and these are included in the download.

The two traditional tracks are "The Wild Colonial Boy" and "Moreton Bay" and Kenneth Cook has written some really great songs for this set. My favourites are "The Drifting Smoke of the Mountain" and "Sir Frederick Pottinger" but others are also enjoyable.

Posted by Paul the Stockman at 7:23 PM