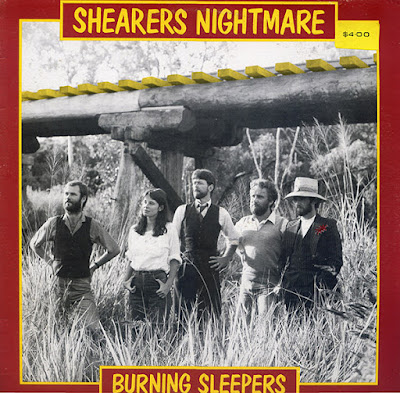 This is another rip from the Victorian Bush Folkie. Thanks again.

The members of Shearers Nightmare were Marsh Robinson, Barbara Bowman, Rob Brock, Paul Keating and Mick McGinty. The band appears to have been based in Rockhampton, Queensland. They brought a lot of enthusiasm to this very eclectic album both vocally and instrumentally. There are only two Australian traditionals, namely, Goorianawa, and The Sandy Maranoa both done at a gallop and with some frantic spoon playing. Crossing the Razorback is about the trek to the gold rush to Mount Morgan. Yeppoon Song is a protest about the Japanese tourist resort at Yeppoon. Draglines protests about the mechanisation of coal mining causing unemployment for miners in Central Queensland. There are three obvious comedy tracks and two more having a love life angle. Agnes Waters Dreamin' is well done, easy listening, and also protesting about wrecking of scenic wilderness. Burning Sleepers is an unaccompanied  monologue. In the midst of this array, they have included a performance of the Celtic standard Arthur McBride. The album content is all a bit shambolic.

This was a Larrikin release in 1984. The LP was obviously in good condition and the tracks required only minimal editing - mostly for the removal of vinyl and equipment noise.

Download with graphics
Click here for MP3 224-256 VBR version 60MB
Click here for FLAC (lossless) version 183MB
The file you download will need to be decompressed (unzipped)
File no longer available? Contact mr.stockman@gmail.com and I will re-up it.
Posted by Paul the Stockman at 9:44 PM