Some time ago, I had a .wav rip of the "Newcastle Folk Festival 1974" passed on to me by a friend. (Just to alert our international visitors -  this Newcastle is in New South Wales)

The album suffers from all the usual problems with folk festival recordings back in the sixties and seventies - limited recording facilities and editing facilities. It appears that the vinyl did not have all that many problems itself. I only had to do minimal editing of the rip but the overall sound quality is very ordinary in parts. One very annoying feature was that there was a lot of applause included on the album after each number and it was not only "canned applause" but it was the same for each performance and on "fade" it sounded like a gurgling drain. I have severely reduced the amount of applause just to keep within the "live" performance spirit.

There are some good performances on this album despite the recording and production problems and some songs and talented performers that we have not heard elsewhere.
I do not have any graphics for the album so I have included a far more modern photo of Tony Suttor who was one of the performers on the day.

Additional February 2017
Coincidentally, Tony Suttor has rectified the absence of any album graphics by providing a photo of his cover - it is an 8" square plain paper sheet glued to the front. It does provide some additional information. Two of the listed "officials, promoters, organisers etc" are still active in the folk world. Norm Merrigan runs The Turning Wave folk festival in Yass. Pam Merrigan is the current "boss cocky" and long-time Artist Director at the National Folk Festival. 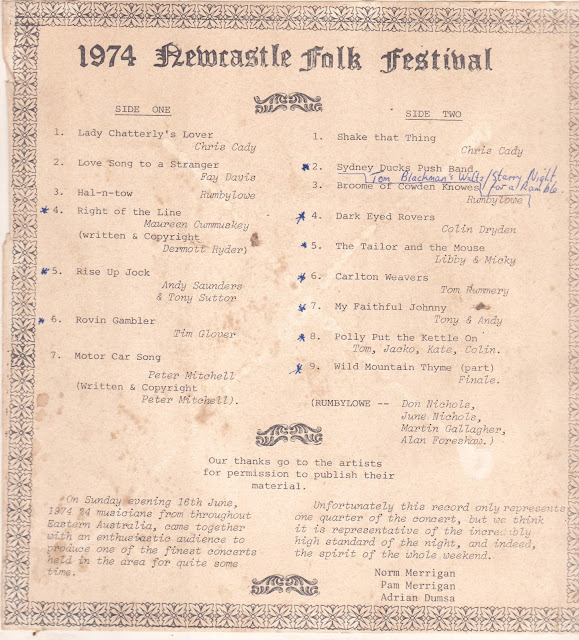 Please note: You can save this graphic by right-clicking on it and then choosing to save it. This graphic is not included in the download package.

Click here to download compressed file MP3 224-256 VBR 49MB
The file will need to be decompressed before playing.
Link fails: Please tell me at mr.stockman@gmail.com
Posted by Paul the Stockman at 3:50 PM