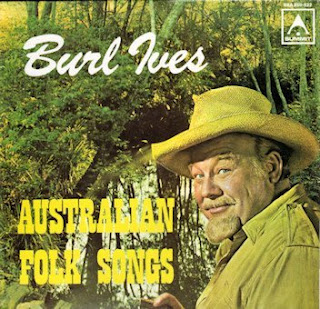 Burl Ives (1909-1995) was brought up in America in a family with strong British Isles and US folk traditions. He was a professional performer by the mid 1930s and had his own radio show by 1940. Although he was also a good actor even achieving an Oscar as Best Supporting Male Actor (1958), folk music appears to have been his primary passion. His visits to England and Australia in the 1950s were very influential to the local folk movements.
He visited Australia in 1952 following an invitation from the Australian Broadcasting Commission where, with music professor Dr Percy Jones, he compiled a book of Australian Folk Songs, some of which he recorded and which were released on a Decca LP entitled "Australian Folk Songs" in the USA in 1958. His earlier performances of Australian folk songs in Australia combined with the release of the LP made it clear that Australian folk songs were something that all Australians could generally be proud of.
His basic style of performance was also highly refreshing with the accompaniment for most songs being just Ives on his guitar and even one without any accompaniment. The glaring exception is that revamped "semi-official" Waltzing Matilda version (which I so heartily despise - give me the original any day!) and it is given a full "anthem" treatment.
There has been a rip of the original album floating around for several years but it has been of a fairly poor quality. Incidentally, the cover of the original LP is hilarious. In a desperate hunt to get an Australian looking cover, Ives is pictured against the background of an Australian tourism poster communing with a toy koala bear stuck in an American birch tree whilst looking ever so elegant with some sort of stick - perhaps a vague reference to Denis O'Reilly's blackthorne stick? I've included a copy of the original LP graphics along with the Australian ones. This rip was taken from a "cheapie' Australian re-release of the original LP under licence and, very sensibly, with a generic type cover (Australian artwork also included). The LP ripped nicely considering the age of the original material.
It is greatly to Burl Ives credit that not once does he attempt any form of accent other than his own. His American accent can be a little disconcerting with these Australian songs but this is far preferable to faking it. It's also much better than born and bred Australians trying to sing some Australian songs with Irish accents (a variation of Bogle's 'plastic Paddy' syndrome). Get this one even if you only do so out of a sense of folk history.

Link failed? Then please leave a comment or contact mr.stockman@gmail.com
Posted by Paul the Stockman at 12:42 AM