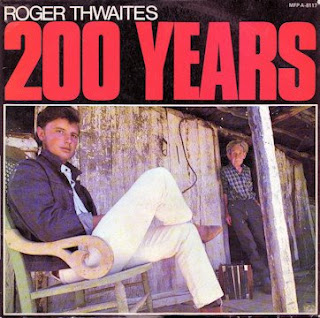 The album was issued to mark the 200th anniversary of the discovery of the east coast of Australia and the claiming of Australia as a British possession by Captain James Cook in 1770 (settlement would occur 18 years later).
In 1970, Roger Thwaites was a young man residing in Araluen, previously the site of New South Wales' second largest gold mining operations. I understand that he may still be living there. He and his father were involved in recording and publishing the history of Araluen and many of the songs on this LP seem to have sprung from that activity. There are some very good songs here mixed in with some that tend to make me cringe but overall it is a very acceptable offering. It is distinctly folky except for the musical backing which, although well performed, has a distinct rock and roll feel to it - very reminiscent of Presley's earliest backing group, The Jordanaires but, of course, it is vocally much different.
Definitely not one for the folk purists but then it doesn't try to be. It was an LP meant for general consumption aimed at a 1970 audience. The graphics give the background for each song.