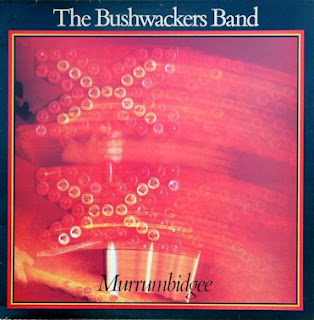 Ian has graciously provided another rip of a Bushwackers LP together with its cover graphics. I suggest that the music already posted speaks for the fine talent of this band.

I do have one reservation. "Augathella Station" is more usually known as "Brisbane Ladies" or similar. It was penned by one Saul Mendelsohn, a stockman, in the 1880s but minor variations have been collected. It is firmly based on the British sea song "Spanish Ladies" about British sailors returning to England from Spain.

Numerous artists performed versions of this song before the Bushwackers, for example, A.L. (Bert) Lloyd, The Rambleers, Denis Gibbons, John Greenway and others. The lyrics at the Contemplator are a fair representation of their versions (and they make sense).

Unfortunately, somewhere along the line, someone with little or no idea decided the song could benefit from some tinkering. Now I'm not opposed to a bit of sensible tinkering - it is a folk song after all. I could live with the elimination of most of the place names although I can't see the point of it. The really absurd bit though is that this version has the drovers still in possession of the herd of cattle on the trip back to Augathella Station (Ranch) after having sold them in Brisbane?? No, they would not have driven any stock back home! Further, this version also has the drovers spending all their "money on the shanty town women" in some country town on the way home. This raises two points - firstly, it was very unlikely that any drovers that way inclined would have any money left after the "Brisbane Ladies" and the "girls of Toowong" (Toowong is an inner suburb of Brisbane) but more tellingly, Australia may have had "shantys" (inns), but not "shanty towns" in that sense and "shanty town women" appears to someone's crude attempt at evoking the concept of USA wild west saloon girls. Altogether, it is very disappointing that the Bushwackers had anything to do with such unauthentic garbage. "Quintessence" has also performed this version.

"Rain Tumbles Down" was one of the legendary Slim Dusty's earliest songs; the classic "When the Rain Tumbles down in July". He wrote it in 1945 and it was first released in 1947 on the old Regal Zonophone label as a 78rpm. The initial release was definitely of the Australian "hillbilly" style but Slim thankfully released continuously improved performances of the song over the years and they appeared on several of his 103 albums. The Bushwackers remain fairly true to the song and it retains a country and western feel.

Great versions of "The Lachlan Tigers" and "Flash Jack from Gundagai".

For those who may be wondering, the LP cover is of a "lagerphone" in frantic motion. A very popular instrument in any respectable "Bush Band". It's often thought to be purely an Australian invention but it's an import from England but given the now very common name "lagerphone" in Australia (because of all the crown beer bottletops used in its construction).

Posted by Paul the Stockman at 8:11 PM