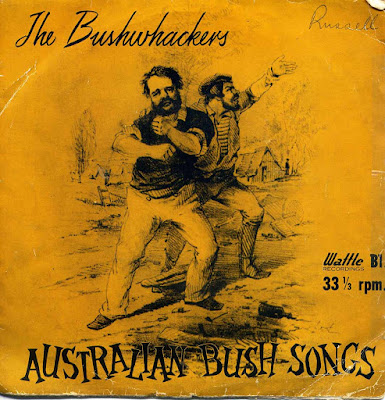 Do not confuse this band "The Bushwhackers" with the substantially later "The Bushwackers Band". This group was one of the pioneer bush bands formed by a group of Sydneysiders in the mid 1950s. The group had a relatively short life but their music was popular for many years. This was a 7" vinyl playing at 33 and a third rpm. It was produced in 1957 by Wattle Records which focused on folk music. It was the first of this type.It was a follow up to their first five Bushwhackers 78s. A search for Wattle Records will locate further information about them at folkstream.com.

We know that the group broke up in about 1957 and three of its members, Alex Hood, Harry Kay and Chris Kay went off to form The Rambleers with other performers; also recording with Wattle starting in 1958. This band also focused on Australian folksongs and included old-time dance music. For those interested, the National Library of Australia, in 2002,  released a compilation CD "The Rambleers" featuring their original material. I have a copy of the CD but I do not know if it is still for sale at either the Library or the National Film and Sound people. Update 2017 - Bush Music Club still has the Rambleers CD for sale. 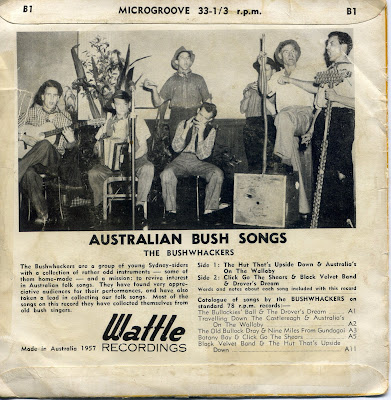 Our kind Victorian Bush Folkie provided digitised files from the EP. Did they call them EPs back then? I doubt it.
Not surprisingly, the vinyl has not aged gracefully and the roughed-up slip gives some indication that it has had a hard life. Still, I have managed to do acceptable cleans of the first four tracks. The fifth track has some bad distortion which I can do nothing about but it is still listenable. Incidentally, these recordings are far from complex and although I have encoded them at 224VBR, as a matter of principle, they could be reduced to a lower level without any noticeable loss. Compressing the total of 27Mb resulted in a .RAR file of only 12Mb. Of course, the recording is mono.

This is definitely an item of historical interest.

Additional: This album did come with an insert/s and Sandra from the Bush Music Club (see comments) has posted images of the insert. The insert also provides lyrics for each of the songs. Click here to see the posting.

Any problems with downloading - let me know mr.stockman@gmail.com
Posted by Paul the Stockman at 7:44 PM