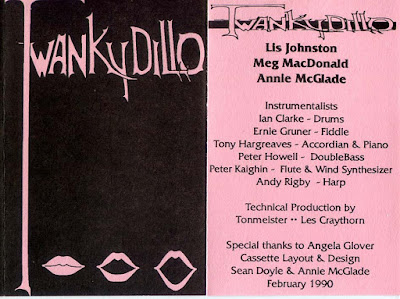 "Twankydillo" was a Victorian-based grouping featuring the singers Lis Johnston, Meg MacDonald and Annie McGlade resulting in very beautiful singing. The album was released in February for sale at the 1990 folk festivals. Tragically, Lis Johnston died towards the end of 1990 but Annie McGlade with others set up the annual Lis Johnston Memorial Award for vocal excellence which , since 1992, has been bestowed at the National Folk Festival in Canberra.

The name "Twankydillo" is from a traditional English folk song but it is not included in this album. The tracks are a mixture of old (2, 6, 9) and modern including the old pop standard "Sugartime". A very enjoyable album with great voices and lots of instrumental backing. Their first track is "The Fields of Athenry" written by Pete St John in the 1970s. It made three successful appearances in the Irish hit lists. Since about 1990, it has become the Irish defacto sporting anthem. It's a great song in the folk style about a fictitious man who, during the Irish famine (1845-1850), steals corn to feed his family and is sentenced to transportation to "Botany Bay". Go to a sporting event in Ireland and you are very likely to hear everyone singing this song; very impressive.

Oh! It is another welcome offering from the Victorian Bush Folkie.

Any problems - email me at mr.stockman@gmail.com

Posted by Paul the Stockman at 2:35 PM