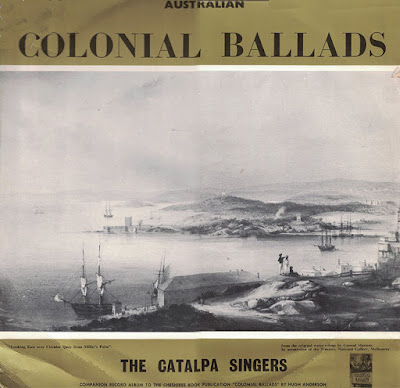 Many blog visitors have mentioned this LP and I have finally obtained a reasonable copy. Better late than never I guess.

This album was labelled as Vol. 1 but, as far as I can discern, they never progressed to volume 2.

The Catalpa Singers were
Shirley Jacobs (vocal lead and guitar), Hans Georg (lead vocalist, lute and guitar), Iain Logan (additional vocal, 5 string banjo and guitar), Allan Pope (bass, autoharp and guitar), and Maryjean Officer on concertina. Other than for Shirley and a few references to Maryjean, I know nothing about these performers. Any contributions??. Hans Georg did do a further album with Shirley Jacobs. I presume that he is actually someone with the Germanic language given name Hans-Georg and, as a performer, has dropped his family name. It sounds like his English pronunciation has some Irish influence. Anyway, enough speculation and I eagerly await enlightenment.

There are no surprises in respect of the tracks featured on the LP. They are mostly part of what I call the top 20 Australian folk standards. The auto-harp features strongly on The Black Velvet Band and Hans Georg's lute provides all the accompaniment to Look Out Below.  Bound for South Australia appears to have a variable tempo to an extent that it is not performed as a shanty/chanty. I note that the liner comments for that shanty stick to the assumption that it involves the Colony of South Australia. I have long held the view that
1. the shanty is not Australian in its origin;
2. it refers to south Australia, that is, any port of Australia all of which are way down south of Europe and north America;
3. and it is quite possible that the basic shanty originated in NE USA - see Cape Cod Boys/Girls shanties and such lines as the mother/sweetheart on the quay exhorting the singer to come home from south Australia and "when we're a walloping around Cape Horn - wish to God we'd never been born - bound for south Australia".

Sorry, I just had to get that off my chest. OK here is the track list:-

Tracklist:
1. Click go the shears.
2. Black Velvet Band
3. The Old Bark Hut
4. Bold Jack Donahoe (actually an Irish Broadside about a real person but usually spelt Donahue)
5. The Eumerella Shore (duffers are Australian rustlers and the song also refers to stealing calves by putting your brand on them (Australian "poddy dodging" - American "mavericking").
6. Bound for South Australia (?)
7. The Wild Colonial Boy (Frequently stated to also be of Irish origin but evidence for this has never eventuated. My view is that it owes much to Bold Jack Donahoe but it is otherwise Australian in origin. In more recent times many Irish singers have taken it up and have claimed it as their own confusing the issue.
8. The Overlander
9. Look Out Below. (A Charles Thatcher composition)
10. The Death of Ben Hall
11. With a swag all on my shoulder.
12. Botany Bay. English playhouse composition.

Graphics are included in the download files. It is a mono LP so files are smaller than usual.
Click here to download MP3 256VBR version 21MB
Click here to download FLAC (lossless) version 70MB
As usual, your download will be just one compressed file. You need to decompress it to extract the folders and the track and graphic files.
Download not available - please tell me by email mr.stockman@gmail.com and I will fix it.
Posted by Paul the Stockman at 10:33 PM