The Colonials "Songs from Down Under" LP 1967 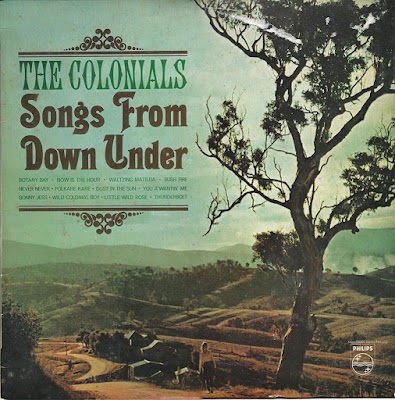 As the liner says, The Colonials were "especially brought together for the project of creating this album". The three members were Kathleen McCormack, and the brothers George and Ken Assang.

Kathleen McCormack was the stage name of one Taree-born Alison Brainwood, a popular singer of the 1960s and '70s. The stage name reflected her primary repertoire of Scottish and Irish songs.  She was later a job actor including a stint in the Bill. In her latter years, she became well-known in psychic circles and authored books on Tarot reading and the like. She died in 2013.

George and Ken Assang were from Thursday Island in far north Queensland. They were of Aboriginal, Pacific Islander and Asian heritage. George was a regular on 1960s and '70s shows including "Bandstand". Apparently he was happy in a wide range of styles including folk, gospel, jazz, blues and country. The liner states "his singing is always full of expression, his voice quality and phrasing are excellent" and, on this album, he lives up to that. There is also a claim that, under the name Vic Sabrino , he was the first Australian singer to perform a Rock'n'Roll number, beating Johnny O'Keefe by a year. George also had sevceral acting roles in Australian dramas and soaps.

The tracks mainly feature songs of known authorship but they represent a good mix that most folk music lovers will readily appreciate.

Mr. K L Appo advises as follows:
An interview with the late Ms McCormack appears at https://www.youtube.com/watch?v=BXB9qjlTp90
Also a selection of tracks from her albums, and a series of children's 45s on YouTube by the same poster as part of an archive of material from Community Television at https://www.youtube.com/user/DarrenGrayManagement/videos  Scroll through at your own risk though; there's some shockers on here, but the occasional gem too....

Graphics are included.
Click here to commence downloading FLAC (lossless) version 177MB
Click here to commence downloading MP3 256-320 version 49MB
You will get a compressed file which you will need to decompress to get the tracks and graphic files.
If the download file is not available, please let me know by email - mr.stockman@gmail.com.
Posted by Paul the Stockman at 11:00 PM