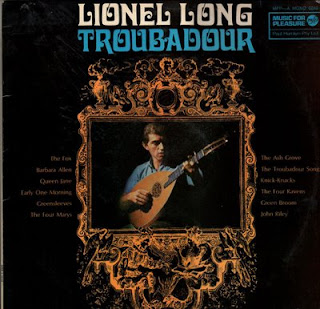 Lionel Long was, in terms of income and general recognition, the most successful folk singer of the folk revival period and did more to bring Australian folk music to the notice of the general population than any other artist. Folk "purists", however, often took exception to his commercially successful ways and it true that some of his early albums were a little "over-the-top" in terms of popular music backing. There are no such problems with this album; it's a good clean performance in the troubadour style. This Album was originally issued under "Long Ago - Songs of the British Isles". Despite his success, there is only one CD of his songs currently available, namely "Waltzing Matilda" which is mainly a re-release of his 1961 LP of the same name but with the cover of this "Troubadour" LP being reused with re-branding as Waltzing Matilda.
For those who may be interested in more detail about this gifted musician please click here to go to an informative site which includes a discography.