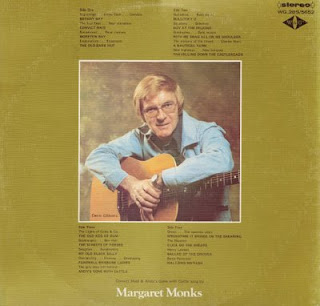 Track List (Note: each music track is preceded by a relevant narrative)
LP1
Botany Bay
Convict Maid (sung by Margaret Monks)
Moreton Bay
Old Bark Hut
Bullocky-O
Boy at the Milking (poem)
With Me Swag all on Me Shoulder
A Nautical Yarn
Travelling down the Castlereagh

This is a very rare Australian two LP set by Denis Gibbons. He was a very early pioneer in bringing traditional folk music to prominence in Australia in the 1950s and 1960s including doing four or five Australian Bush folk songs for the soundtrack of the American produced movie "The Sundowners" in 1960. Despite having produced many albums over the years only one CD was released (1999)(presumably it is a compilation re-release.) His work was mainly with Australian traditional folk music but he also performed traditional folksongs from other English speaking countries.
He did a series of "Folksongs of Australia" albums including this one "The Struggle for Survival" which was recorded in 1975.
Each song is preceded with an historical narrative which can be convenient if a listener needs a context for the songs but otherwise can be a little annoying.
Denis was always a very competent, straight-forward performer and I am sure many will enjoy the music. Margaret Monks also does a great job with her two tracks

Posted by Paul the Stockman at 8:25 PM