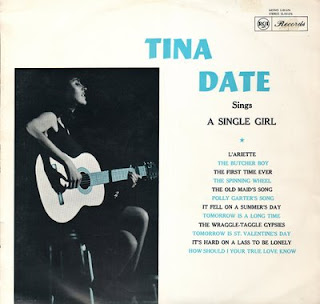 track list
Spinning Wheel
It's Hard on a Lass to Be Lonely
L'Ariette
Old Maid's Song
Polly Garter's Song
A Single Girl
Raggle Taggle Gypsies
The First Time Ever
The Butcher Boy
How Should I My True Love Know
Tomorrow is St. Valentine's Day
It Fell on a Summer's Day
Tomorrow is a Long time

Tina was a Melbourne girl, classically trained, who quickly and successfully adapted to the folk revival of the 1960s with many broadcast and public appearances. This was her only album - an eclectic mix of traditional and modern folk music, two of the songs from Shakespeare's Hamlet, an Elizabethan piece and Dylan Thomas' Polly Garter's Song. Sadly, the only ethnic Australian track is It's Hard on a Lass to be Lonely written by that great Australian folk poet, Bill Scott.
A great singer here accompanied by some very able musicians including Dave Guard previously of the Kingston Trio credited as "Dynamite Finkelstein".

Tina went to the USA in about 1967 where she regularly performed but was not recorded. She had a stormy relationship with Phil Ochs. She later took up employment with the United Nations. Reportedly resident in country Australia, the latest I heard was that Tina was involved in the United Nations relief effort in Haiti.

Posted by Paul the Stockman at 7:28 PM