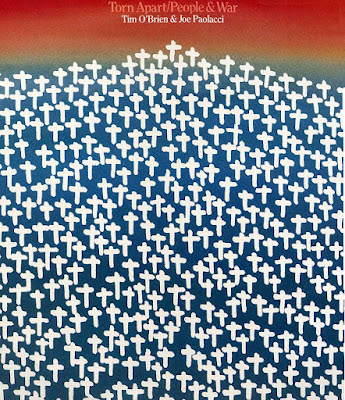 This is another LP from the Victorian Bush Folkie. The album appears to be a bit of a joint effort with the rear of the album slip advising the performers as "Joe Paolacci & Tim O'Brien with Tony Lavin, Richard Leitch, Peter Dwyer & Hugh McDonald". It was a Melbourne based production.

This album features many of the anti-war or Irish Rebellion classics, mostly popular in the 'sixties and early 'seventies with a couple of traditionals and three spoken items so it's quite an eclectic offering with leading performances from Paolacci, O'Brien, Lavin and Richard Leitch.

Despite the admirable sentiments, the overall theme was probably even a little outdated in 1982 and doing copy covers of songs previously brilliantly performed by others is always risky.  This album does not translate that well to 2015 but that's just a personal opinion and contrary opinions are welcome.

Tracklist
1. Joe Paolacci performs Buffy Saint-Marie's 1964 classic "The Universal Soldier". It was deservedly a big hit for Donovan.
2. Tim O'Brien performs Dominic Behan's "The Patriot Game". - an IRA favourite.
3. The traditional "Newry Town" by Tony Lavin. A song about a highwayman whose nationality is somewhat vague. No connection to war or rebellion.
4. Phil Coulter's "The town I loved so well" An Irish "troubles" lament.
5. Tim O'Brien recites Dame Mary Gilmore's poem "War"
6. Joe and Tim combine in the traditional "Eileen Aroon" (it has nothing to do with war or rebellion)
7. Tim O'Brien sings his own composition "Davy Fields". It is a very interesting composition which I have never heard before. IMHO it is the outstanding item in the album.
8. "I.W.W." - Tim O'Brien reads from an Australian poster issued in 1915. Short, sharp and pointed!
9. The ancient Scottish lament "The Flowers of the Forest" - Joe Paolacci. Best known in Australia because of Eric Bogle's phrase "did the pipes play the Floo'rs of the Forest". Commonly known as "The Lament" and public pipe performances are usually restricted to funerals and remembrances for the dead.
10. A recitation of Henry Lawson's "Scots of the Riverina" by Richard Leitch in a strong Scottish brogue.
11. "The Button Pusher". Tony Lavin sings this comedy/ironic song of unknown authorship about a person who has the job of pushing the button for all-out atomic war.
12. "The Sun is Burning" performed by Tim O'Brien. Composed by the famed Scottish born, Birmingham resident Ian Campbell, a prominent figure in the UK folk revival. The song became very popular with many Irish folksingers. The "Sun" in this case is the blast of atomic bombs.
13. "Einstein" is a recitation by Joe Paolacci of a very disparaging opinion that Einstein wrote about the intellect of soldiers.

Click here to begin downloading the album and its graphics as one compressed file. MP3@224-256 VBR. 55Mb. Decompression capability required to expand file.

Link fails? - tell me mr.stockman@gmail.com and I will re-up the file.