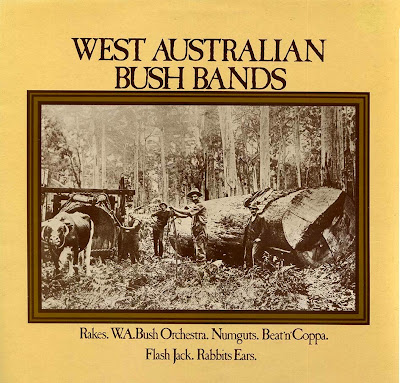 Another great offering from the Victorian Bush Folkie.
Topic records produced this LP and it was a pleasure to work on a rip from good quality vinyl. Glitches, and there were a few, were relatively minor and easy to correct although a critical listener may still pick out a few very minor problems. I know nothing about these six bands and there are no notes about them on the record slip. The band names look somewhat suspicious and one or more of the bands may have been one-offs. Information will be very welcome. Additional:- we now have confirmation that they were existing bands and Numguts is still active (see comments). For the main part, the performances are very good.

The tracks are a mix of traditional and modern Australian folk songs with some instrumental jigs and reels.To my ear the jigs and reels are very uninteresting. Other opinions are welcome.

Tracklist
1. The old Bullock Dray by Beat 'n' Coppa (very good performance of this standard)
2. Bring the Beer to Broome by the Rakes (a new one to me - very enjoyable)
3. The Timbercutters Song by W.A. Bush Orchestra
4. Billy of Tea by Numguts. (Tom Blackman's Waltz in the middle is not acknowledged)
5. Jigs by Rabbits Ears
6. All for me grog by Flash Jack (Irish 'across the western ocean... and "nobbin nobbin boots' version)
7. Shearing Song by the Rakes
8. Sir Frederick Pottinger by W.A. Bush Orchestra (written by Kenneth Cook for Lionel Long "Bold Bushrangers" 2 LP set).
9. The Contract Mailman by Beat 'n' Coppa (honours a W.A. mail contractor from the Broome area)
10. Jigs by Flash Jack
11. Augathella Station by Numguts. (see comment below)
12. Cool Bush Nights by the Rakes
13. Johnny Stewart (drover) by W.A, Bush Orchestra (poor performance lacking musical coherence)
14. Reels by Rabbits Ears.

Re "Augathella Station".  It is now generally accepted that Saul Mendelsohn, stockman turned shop-keeper. originally penned "Brisbane Ladies" which then entered into the folk tradition but remaining close to the original version; the only significant variation being the name of the musician at Nanango and whether he played a concertina or a banjo. It tells the story of a group of stockmen who had driven a mob of cattle to Brisbane where the cattle were sold. They hit the good times in Brisbane and were then riding home to Augathella Station and the song focuses on the towns on the way home.
Unfortunately, in more modern times, someone (perhaps Bushwackers ;-), decided to rewrite part of the song and this is the version sung here. Despite the cattle already having been sold in the first verse, the drovers are now taking the herd back to Augathella (Coals to Newcastle anyone?). For a little more excitement the stockmen, on the way home, stop off at a "shanty town" and sample "the shanty town women" - pure American terminology. We had shanties (solitary roadside inns/taverns) but never shanty towns. Anyway, the Bushwackers put out this version and, thankfully, only a limited number of performers have subsequently picked it up. When city people decide to rewrite bush ballads things can really go really wrong when they, as "Banjo Paterson opined, "don't know a horse from a hoe".

Still, I recommend the album as overall it does contain some very good music and a few songs not previously covered on this blog.