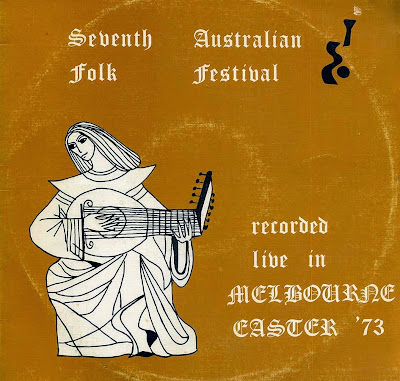 This is another album kindly provided by Victorian Bush Folkie. Thanks again.

The National Folk Festival (as it is now known)  commenced in 1966 originally in Victoria and, after about a decade, moved to Canberra. The 50th Festival will be held there in March next year (2016). Their website can be reached by clicking here.

I believe that they usually put out an album of performers for most, if not all years and an occasional commemorative album. I suspect that there will be one of those for the 50th festival featuring selected artists from various years.

Of course, these festival albums can only feature artists who can, and do, give permission for their live festival performances to be used.

This album is a typical example of recorded live performances in the 1970s. The sound quality varies quite a lot and sound equipment and performances are far more sophisticated nowadays. Incidentally, the sound technicians at these festivals are mostly volunteers and they deaserve a lot of praise for their contributions over the years.

Tracklist
1. Rawhide by Country Express (bluegrass - not the series theme song)
2. Fiddlers Green by Declan Affley
3. Tell it to me by John, Juanita and Marnie Sheehan.
4. Robin Hood's Progress to Nottingham (Child 139) by Hugh Macewan
5. The Conservationist by The Ramblers (members listed on graphics)
6. EE, AYE AA CUD HEW and Find the Cost of Freedom by Danny, Gordon & Shayna
7. Address tae the Haggis Recitation by Richard Leitch (mostly incomprehensible to me)
8. Sean Ryan's Hornpipe and The Cuckoo's Nest" Instrumentals - Jacko Kevans on concertina and Bob MacInnes on fiddle.
9. Sugar Momma by John Crowle
10. Before I met You  by Country Express - bluegrass
11. Fair Flower o' Northumberland (Child 9) by Rhonda Mawer
12. Bright Morning Star An Appalachian Hymn sung by a Workshop Audience (presumably not a singing workshop - included to complete album - rapid deletion recommended)

Click Here to go to the download host MediaFire to get compressed file containing the album and the LP graphics. Needs to be decompressed. 56Mb MP3 224-256 VBR.

If download does not work - let me know by a comment on this entry or email mr.stockman@gmail.com.

Posted by Paul the Stockman at 8:14 PM