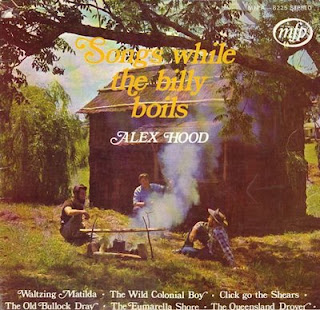 Alex Hood was another of the early pioneers in the Australian folk music revival and has released several LPs and CDs the latter including some re-releases of LPs. Unfortunately, most of his LPs that I have are too badly worn for successfully ripping. Two LPs of note are "The First One Hundred Years" and the "Second One Hundred Years" neither of which have been re-issued on CD. Anyone out there got a decent copy?
Alex still performs at folk festivals but his main focus over the last three decades has been on performances for children. He is a competent entertainer but his best work has been as a member of bush bands, most notably, The Bushwackers, and subsequently The Rambleers.
Music for Pleasure (mfp), the producer of this LP was a UK record label also active in Australia and South Africa. They produced budget-priced LPs of various genres which were sold outside the usual record shops e.g. petrol stations and newsagents. They were very active in the late 1960s and 1970s and, thankfully, they picked up a lot of the work of folk singers. The flip-side is that the records wore out far faster than quality ones. This one has survived satisfactorily.

Posted by Paul the Stockman at 2:55 PM