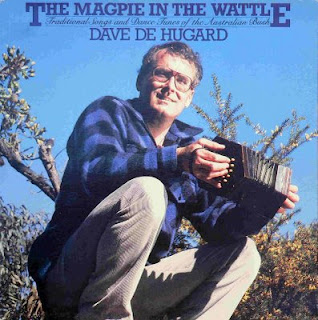 
This, Dave's second album, was released about 16 years after the 1969 "Freedom on the Wallaby" (already posted). Here we see a greater focus on old-time dance hall music to which he successfully brings the Australian bush flavour.
This is not one of my rips as I have never been able to obtain this LP nor have I found any graphics for it but Ian from Adelaide has generously supplied them and they can be downloaded (see below). The tags identify the person encoding as "RK2310" so many thanks for a job well done.
Stand-outs on this album include "The Rabbit Trapper", "The Stringybark Cockatoo", both traditionals and Bill Scott's "Hey Rain" where he describes what it's like in Far North Queensland where rain is often measured in metres. The introduction of rabbits into Australia in the early 1800s was, and continues to be, an environmental disaster despite strenuous efforts to eliminate them. Rabbit trappers were always welcome on the stations and they could trap hundreds each night usually going round their traps three or four times a night. In the early days, their fur was in demand for the manufacture of felt for hats. The last time I saw a rabbit trapper was in the early 1960s when the demand was for the rabbit meat.

Posted by Paul the Stockman at 4:26 PM