The Settlers "Songs of the Snowy Mountains" 1999 CD re-release 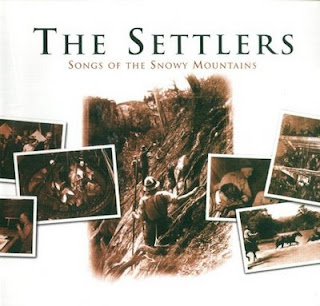 In 1949, the Australian Government initiated the Snowy Mountains Scheme, a major engineering scheme involving diverting rivers from the Australian Alps into the far dryer inland combined with the generation of hydro-electricity. In those immediate post-war recovery years, Australia did not have sufficient manpower and other resources to construct the 225kms of tunnels, 16 dams, 7 power stations, pipelines and aqueducts involved. The greater majority of workers came from overseas and included many of the displaced persons from Europe. Of the 100,000 persons working on the project, 120 died in various mishaps.
Ulick O'Boyle (Irish), his wife Ann Rutherford (English), and a Peter Barry (also English) were three of those workers. They formed as a trio and developed an impressive repertoire of songs written by Ulick about the various aspects of the scheme. Initially, they performed just for their fellow workers at the various drinking holes at the scheme. In 1966, their body of work so impressed a record producer that they were immediately retained and their first LP "Sings Songs of the Snowy Mountains" was released in 1966. It was a big success so it was soon followed up with "Sings More songs of the Snowy Mountains".
In 1999, as part of the 50th Anniversary of the Scheme, those two LPs were released on the one CD featured here.
This really is a mixed bag. For example, there is the pathos involved in the submerging of two towns, the original Talbingo and Jindabyne; the grief at the deaths of Big Pedro and Olaf the Dozer Driver Man (both true events); the comedy of Snow Kitten vamp and the joy of the Cooma Cavaliers; the optimism of Dear Hoffman; the despair of the gambling addict in Blowering Dam and the homesick Jack Frost. They were songs which firstly resonated with their fellow workers and secondly with those of us looking in.
Peter Barry resides in Sydney and he did make a cameo appearance in 2008 at the National Folk Festival in Canberra where he performed with a Settlers tribute group. I understand that Ulick lives in the Canberra area.

This rip has previously been posted in Time Has Told Me in three parts.

DOWNLOAD OF THIS CD NO LONGER AVAILABLE - It has been re-pressed so please buy it by contacting Shannon O'Boyle (daughter of Ulick) from shanno2222@hotmail.com or at:-
Monaro Books & Music
49 Vale Street
PO Box 1234
Cooma NSW 2630
Australia

Posted by Paul the Stockman at 7:17 PM