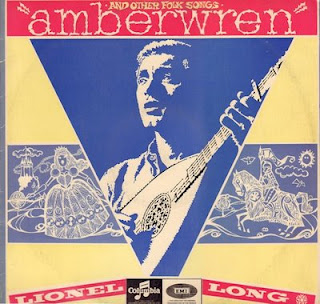 Lionel Long has previously featured here mainly for traditional music of the British Isles, Australia and of the sea and ships. This album is markedly different. The only traditional song it features is the American "Boll Weevil" which he gives more of a rock than a folk treatment. "Amberwren" is the feature track of almost 17 minutes and took up all of side 1 of the LP. It was penned by American musician and songwriter Mason Williams in 1963 and takes the form of a minstrel lay of the medieval period which well suits Lionel's folky style and the backing he gives it on his "guitar-lute". (I don't know if any other musician ever recorded this song). "I Dreamed of Two Ships" and "Two Doves" were both composed by Lionel in the folk style demonstrating that his many talents also stretched to song writing. "Farewell" is the Bob Dylan composition. "Namatjira" is a protest/tribute song for the Aboriginal artist Albert Namatjira; the work of Gordon Tolman, and "Turn, Turn, Turn" is, of course, the well-known Pete Seeger composition made famous by "The Weavers".
It has been a long struggle ripping and editing this album as all three copies I hold have been damaged to some extent and you may well notice that there are still some residual problems but I am sure you will enjoy this album.