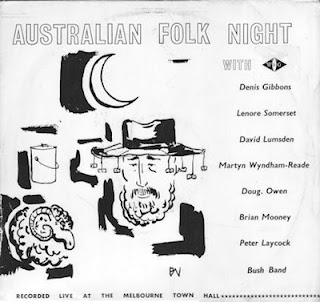 I have noticed that a lot of people have been looking for a rip of this LP as it is regarded as a rare Australian Folk classic. The album features some of the performances by well-known folk singers at the Melbourne Town Hall in 1964.  This particular LP was released in 1969.  Two of the artists at that concert were contracted to another label and do not appear. Further, some of the numbers were not considered good enough for release on LP.
I actually attended this concert and it was brilliant. The Town Hall was completely packed with a very enthusiastic audience being entertained by very enthusiastic and competent performers including Martyn Wyndham-Read (since returned to England), Denis Gibbons (who produced the LP), Brian Mooney (who was, and still is, more Irish than the Irish), the lovely Lenore Somerset, Peter Laycock, David Lumsden and the Bush Band.
The recording of the performers was fairly "rough and ready" as indicated by the exclusion of some poorly recorded numbers . You will especially notice this in some of the group performances where some artists are obviously too far from a microphone for proper pick-up. I have managed to enhance some of these tracks for a more even sound but there really is a practical limit as to how far this can be taken.
But, please do not let this deter you from obtaining this music. The performances more than compensate for the recording defects. In this live setting, the artists give very natural and unstilted performances which you will most likely enjoy.