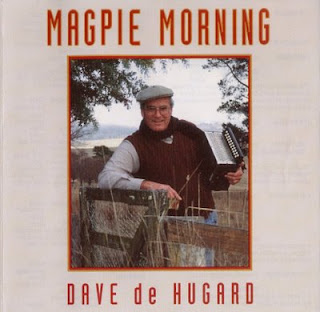 This CD rip was by a "K2310" to whom I give thanks because, for some inexplicable reason, the CD has not been available for purchase for some years. Dave de Hugard does market his later CD and provides it at folk festivals for sale but this one makes no appearance anywhere as far as I can ascertain and it is obviously quite rare. Accordingly, I have no hesitation in making this one available for download. I am sure that many of you will agree with me that this CD should still be marketed.
Again, this album is a good mix of instrumentals and traditional songs. I understand that almost all the instrumentation on the album was played by Dave through multi-layering. "The Rabbit Trapper" makes a re-appearance here but with very different instrumental backing from the 1985 LP. The "Drover's Return" is another version of the song usually known as "Brisbane Ladies" or "Augathella Station". "Sweeney" is adapted from a late 19th century poem by Henry Lawson first made famous as a song by the late and great Australian country singer, Slim Dusty.

Posted by Paul the Stockman at 4:58 PM