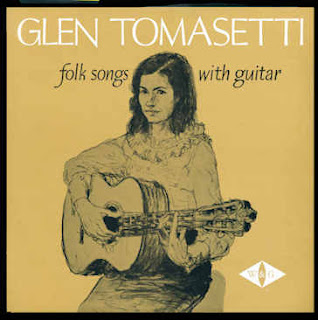 Glen (Glenys Ann) Tomasetti (1929-2003) was a well-known folk singer, author, actor, and left-leaning activist born and based in Melbourne, Victoria, Australia. She was a prominent Melbourne folk singer and organiser in the 1950s and 1960s. She produced several albums and it seems that not one of her tracks has ever made it to CD and her old LPs never seem to be available.
I recently found a rip of this 1963 LP. The MP3 files were at 320kbs CBR in stereo format. In fact, the tracks were probably originally encoded at about 192kbs in mono and later meaninglessly converted to 320 stereo. I have managed to clean up some problems with the tracks and have recoded them at 192 VBR mono. The results are quite good.
On this LP, Tomasetti presents quite a varied range of folk songs from around the world including some excellent folk rarities. I have been startled by how many are completely new to me. (Also submitted to Time Has Told Me)