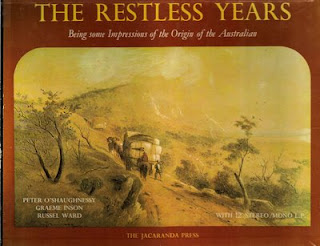 In 1967, Peter O'Shaughnessy, an accomplished actor, author and director, wrote and acted in an Australian Broadcasting Corporation television program entitled "The Restless Years" giving a culturally based examination of Australian history and the development of the Australian "character". In 1968, Jacaranda Press invited O"Shaughnessy to follow-up with an A3 size book entitled "The Restless Years: Being some Impressions of the Origin of the Australian" assisted by the historian Professor Ward, an expert on Australian Folksongs and Ballads, and the artist Graeme Inson for graphic research and development.
The publication was to cover the period leading up to the establishment of the first convict settlement to Federation in 1901. There was a strong emphasis on early recollections, and the related English and Australian folk songs and poetry of the period. In the same spirit, the book was accompanied by an LP with poetry and other spoken word material by Peter O'Shaughnessy and traditional songs sung by Alex Hood (previously posted here) and Marian Henderson, a very talented folk singer of the 1960s. Musical accompaniment was provided by Ron Carson on double bass and Richard Brookes on harmonica. Marian Henderson sings "Moreton Bay", "Look Out Below", "The Streets of Forbes" and "Old Black Alice" while Alex Hood sings "The Old Bullock Dray", and "The Eumerella Shore", and the two combine to sing "On the Banks of the Condamine" and "Waltzing Matilda" which, thankfully, is the original version penned by "Banjo" Paterson. O'Shaughnessy recites two traditional songs, namely, "Jim Jones at Botany Bay" and "Five Miles from Gundigai" (I'd have preferred that they be sung). He uses a wide variety of voices in his spoken word but, strangely, considering that he was born and brought up in Melbourne and never saw Ireland until he was an adult, he has more of an Irish accent than an Australian one. A very interesting LP.
For the international visitors, perhaps the following lexicon might help with this and other postings. Also, if you want any help understanding any of the words or the context of any songs in my postings, just ask away.

And many thanks to the kind visitor who pointed out to me the existence of this album.