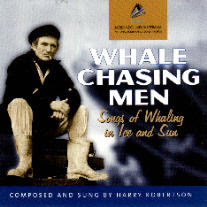 Harry Robertson (1923-1995) was born a Scot but sensibly migrated to Australia in 1952. He worked for several years on whaling ships writing several poems and songs about the industry and the whaling men. He also became actively involved in popularising Australian traditional folk music. especially in Queensland where he became involved in the highly successful Maleny Folk Festival since moved to become the Woodford Folk Festival. Probably the best known song outside of Australia is the "Wee Pot Stove" done by Nic Jones as "The Little Pot Stove" and by Gordon Bok, Muir and Trickett as "The Wee Dark Engline Room". Jones also did "Ballina Whalers" as "The Humpback Whale" but I much prefer Hood's treatment.
In arguably the best of her recorded performances, Marian Henderson does a wonderful job on the powerful "Norfolk Whalers". This is a song about the residents of Norfolk Island, once an Australian convict settlement and subsequently the home of many of the descendants of "Bounty" mutineers. These whalers operated from the island not from a mother ship and would set out when a whale was spotted from the land. Thus they had to get the whale to land by sheer rowing power.
Sadly, I have only the one wee graphic - can someone out there please help. (encoder unknown)

Download link deleted per relayed instructions from Harry Robertson's widow, the holder of the copyright to the music.
Posted by Paul the Stockman at 9:21 PM