The Overlanders "Tribute to Western Australia 150" 1979 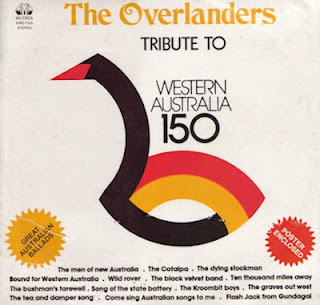 Track List
1. Bound for Western Australia
2. The Graves out West
3. Song of the State Battery
4. Come sing Australian Songs to Me
5. Ten Thousand Miles Away
6. The Kroombit Boys
7. Wild Rover
8. The Catalpa
9. The Men of New Australia
10. Flash Jack from Gundagai
11. The Tea and Damper Song
12. The Dying Stockman
13. The Bushman's Farewell
14. The Black Velvet Band

I bought this LP in 1979 and, for the life of me, I cannot recall a thing about these performers. This album represents a fairly mixed performance. In a couple of songs the lyrics delivered by a female singer are a little indistinct especially in "The Graves out West" track. The better tracks include "The Men of New Australia" about a socialist "utopia" settlement formed by Australian residents in Paraguay in the 1890s lead by an expat American William Lane (a rapid and utter failure). Their relatively easy-going rendition of "Wild Rover" is refreshing. The "Song of the State Battery" was written by a miner about the Government assayists Gold ore crusher at Kalgoorlie and the hope that, one day, it will give positive results for his samples. Kalgoorlie is still a major gold mining town.