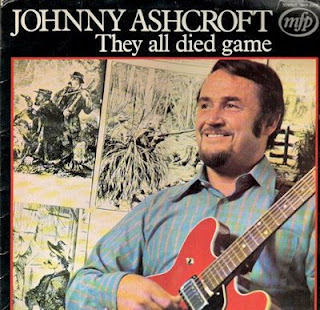 Johnny Ashcroft began his singing career during the Second World War as a "hillbilly" singer (early Australian "country music" often with lots of yodelling). He cut a few 78s and ended up recording Australia's first C&W LP "Songs of the Western Trails". There is quite a lengthy entry for him on Wikipedia for those interested. He is best remembered for his 1960 hit song "Little Boy Lost" about a toddler lost in the bush and found alive after a massive search lasting four days.
This album was released in 1971. Each song relates to a bushranger and was written by Joe Halford and Johnny Ashcroft based upon extensive research on bushrangers. I find it a hard album to categorise but I tend to think of it as country and western but the overall ballad approach makes one think of "folk". Then again, the musical backing owes much to jazz. I would love to hear other's thoughts on this album.
Lyrically and musically, it is a great album with some very well-written songs giving us different insights into both some of the Australian bushrangers. For those who love irony, one of the songs looks at the fate of Frank "the Darkie" Gardiner (subject of other folk songs also), an Australian-born bushranger, who, as a condition for his release from a lengthy prison sentence, was exiled to the USA - most of the others were born elsewhere and then transported here as convicts!

Posted by Paul the Stockman at 9:43 PM