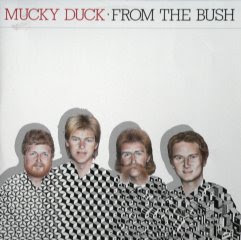 Track List
1. The Swagless Swaggie
2. The Chant of Jimmy Governor
3. Whiskey is the Life of Man
4. Limejuice Tub
5. The Wreck of the Dandenong
6. The Musical Priest
7. When I'm Sixty-Four
8. The Four Horsemen (The Bushrangers)
9. Three Reels (Miss McLeod, Drowsy Maggie, Sleepy Maggie)
10. Jim Jones
11. The Shearer's Dream
12. From the Bush

You might reckon that the inclusion of the Beetles song "When I'm 64" is a bit of a clue that this "bush band" is not strictly traditional and you'd be mostly right. They bring some new perspectives to the performances of some of these songs, sometimes a touch of country, a touch of folk rock and occasionally a sense of barbershop quartet occasionally heavily backed by electrics and then they confuse you by being largely traditional. It all makes for a refreshing change.
This is a Western Australian band composed of Roy Abbott, Davy Browne, Andy Copeman, and Erik Kowarski.
Ian of Adelaide has generously provided this rip and the cover graphics for our enjoyment. Many thanks again Ian.

Posted by Paul the Stockman at 7:42 PM