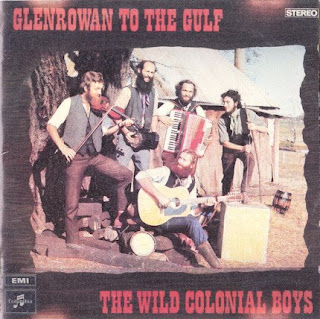 This album was originally released as an LP in 1970, re-released on Larrikin (or so I think) in the 1980s and then in 1996 on CD. This rip and the provided covers come from that CD. MP3 ripped at 196-224 VBR.
Although performing some of the usual Australian traditional songs, they too have usually opted for lesser-known versions in both lyrical and instrumental terms. Like many bands, they tend to substitute as to what that "bloody dog" did in the tuckerbox (food container) five or nine miles from Gundagai. Some may be wondering as to why "sitting" in the tuckerbox was such a bad thing. It makes more sense if you put the 'h' back into "sat". "Poor Ned Kelly" is not traditional - it started as a tongue-in-cheek Australian "hillbilly" song in the 1930s giving an outline of Ned Kelly's criminal activity and execution but also deriving the moral that modern day "bushrangers" use taxes and high prices to rob everyone with impunity - a great song picked up by many Australian folk singers. A very enjoyable album.