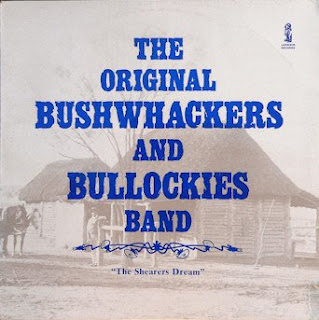 There is a lot of confusion about the various "Bushwhacker" and "Bushwacker" configurations so perhaps a little explanation is needed.
In 1952, John Meredith, the renowned Australian folksong collector, formed the "Heathcote Bushwhackers" shortly after becoming just "The Bushwhackers". This band was really the first to bring genuine bush music, backed by the common instruments of the bush, to the general public. They had a few changes of members and broke up in 1957 with some members going on to "The Rambleers". They recorded one very successful LP "The Drover's Dream" (anyone got a good copy?).

The idea of being a "Bushwhacker" caught on and there were other bands using "bushwhacker" in their names to signify that they were "bush bands". This caused a lot of humour in the real bush where the term was usually deliberately spelt as "bushwacker" (meaning the "common" people living and working in the bush - not towns or cities) and they reserved the American based spelling "bushwhacker" for "ambushers", that is, a bushwacker might be bushwhacked by a bushranger.

We move on a few years to 1971 to the formation of a new band entitled "The Bushwhackers and Bullockies Band". As I understand it, in 1974, under that name they released their first LP "The Shearer's Dream" on the Picture Records label; the members of the band then being Dave Isom, Mick Slocum, Tony Hunt, Jan Wositzky and Dobe Newton. In 1980, the LP was re-released on Larrikin Records (LRF019) with the word "Original" inserted as a description, as by then, the band had more appropriately become "The Bushwackers" and its membership had changed but "The Original Bushwackers and Bullockies Band" is now almost universally used as the performers of the LP. The band later became just "The Bushwackers". A 3CD compilation of some of their earlier albums was put out in the '90s under the name "The Great Bushwackers". That compilation is shared on this blog.

Here is their website. The band is still active at music festivals as far as I know.

However, there is no confusion as to the quality of this band in its various configurations - consistently great performances both vocally and instrumentally with an excellent Australian "bushwacker" flavour as even this first of their albums readily demonstrates. Ian from Adelaide has provided this excellent rip of the LP so give him some encouragement and I'm sure he will offer more. So, thanks from me Ian.

Jan Wositzky, an ex-Bushwacker, has now obtained the rights to this album and intends to bring it out on CD in the near future and there may even be a bit of a reunion of some of the past members.  Accordingly, downloads of this album are no longer being offered.  Hopefully, we will be posting details when the CD is out.
Posted by Paul the Stockman at 2:56 PM