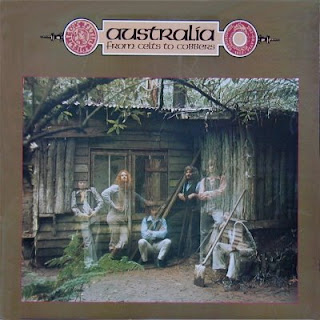 Track List
1. From Celts to Cobbers
2. Moreton Bay
3. South Australia
4. The Catalpa
5. O'Carolan's Concerto
6. The Ballad of Ben Hall
7. The Cross of the South
8. Waltzing Matilda
9. The Ballad of the Kelly Gang
10. Scots of the Riverina
11. Dennis Murphy's/The Forty-Two Pound cheque
12. Stalky's Song

The Cobbers (Australian colloquial for mates, friends - now rarely used) was a very active bush band on-and-off during the 1970s and 1980s putting out over ten LPs most of which are now available from their website (see below) (entry edited following contact from John Armstrong of the band)

On this album, the band has a good, lively bush sound featuring some of the regular ballads performed by bush bands with a few interesting extras including the sea shanty "South Australia" which is often thought to be Australian in origin. It's actually of American origin based on the sea voyages from north-east USA round Cape Horn to Australia in the south (not the State of South Australia). Another variation is the shanty known as "Cape Cod Boys" or "Cape Cod Girls" which also has the refrain "And we're bound for south Australia".
A very nice LP which has ripped well.

UPDATE 18 Nov 2010
Previously reported (in June) that the website link was not working (address had been hijacked by the look  of it). Site has now been working properly for some time which I discovered on 22 Sep 2010 and I advised of this elsewhere but failed to do so on this entry.  My apologies to anyone effected.
Further UPDATE 3 Feb 2012 - This site has been up and down in the interim and is now back up again.
15 April 2013 - no obvious websites for the Cobbers - just an empty facebook identity,
Posted by Paul the Stockman at 9:27 PM