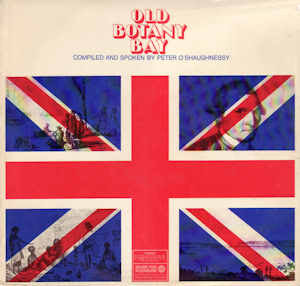 The year 1970 marked the 200th anniversary of the discovery of the east coast of Australia by Captain James Cook. Record producers rushed out several LPs to cash in on the publicity surrounding the anniversary. This was one such LP - a relative cheapie produced by the Music for Pleasure label.
The LP was compiled by Peter O'Shaughnessy whom we met in the recent posting "The Restless Years". This LP basically followed the same style with O'Shaughnessy tediously reciting from various historical documents (with some questionable accents) relating to the exploration of Cook and a subsequent report by the botanist Sir Joseph Banks recommending Botany Bay as a site for a convict settlement etc. Additionally, there are a couple of poems and six folk songs performed by Marian Henderson and a John Currie.
I paid the princely sum of 50 cents for this LP at a "trash and treasure" market on a punt that it might not be as badly damaged as it looked. Sadly, my first impressions were accurate but Marian Henderson, despite being Australia's most popular female folk artist of the time, recorded very little of her music and, so I have persisted in ripping the music tracks and have also ripped one of the poems which was written by Frank "The Poet" McNamara who was transported (that means he was a convict) to Australia on 1819. I ignored everything else mainly because it was not worth the considerable effort involved. The tracks in the download are:-
"Here's Adieu to all Judges and Juries" - Marian Henderson with John Currie
"The Convict Maid" - Marian Henderson
"Van Dieman's Land" - Marian Henderson
"The Girl with the Black Velvet Band" - John Currie with Marian Henderson
"Moreton Bay" - Marian Henderson (not the same as on "The Restless Years")
"Bold Jack Donahue" - John Currie with Marian Henderson
and the poem "The Convict's Tour of Hell" recited by Peter O'Shaughnessy.
They have all come out surprisingly well considering their original states.
(Songs at 192VBR - Poem at 128VBR)

I, and some visitors, are desperate to get more of Marian Henderson's recordings especially her one solo LP "Cameo" released in 1970. Any of her EPs or compilation LPs featuring her will be very welcome also. Can anyone please help? (Post Note: Her 2 Australian folk PIX magazine EPs have now been posted but there are still 2 general folk PIX EPs to come)


Link failed? Then please leave a comment or contact mr.stockman@gmail.com
Posted by Paul the Stockman at 10:40 PM